Welcome to the Buffalo Coulee Ranch where history has made a full circle. Nestled along the Missouri River is the Buffalo Coulee Creek where it is said Lewis and Clark made way to discovery. Years past this coulee once had bison and we have revived it with bringing back the bison yet to again roam this land. With years of heritage in this ranch being homestead 100 plus years ago, this family run bison operation of 20 years hopes to keep this history alive.

Established in 1904 by Phillip Kesselring, who homesteaded here after he migrated from Russia to start a new life on the prairie. The first building on the farm was a small wood building which homed both Phillip and his wife Johanna on one half of the building while the other half was reserved for the horses. With nothing but an old wood burning stove in the corner for heat they lived in that small building, which is still used today on the ranch, until their  home was built.

Phillip was a excellent craftsman and soon a barn was built along with a hog barn and a grainery. As the story goes, when the barn was being built he and a fellow hand had taken the horse and wagon team to town for supplies and by the time they returned a tornado had gone through and blew the barn down. Without much delay work resumed and the barn was put back up and as time went on there was a north and south lean attached to it. To this date the barn and other buildings built by Phillip still stand.

With life on the prairie having many challenges, Phillip and his family built there life with Phillip being a carpenter. It is said that Phillip built two doors on the barn one in the front and one in the back to let the bison pass through it. I often wonder if that tale is true as its hard to imagine times back when the bison roamed wild and free on this land. He worked real hard and it is said he built some of the structures in the area for other folks.

Phillip and Johanna had five children. Two daughters and three sons with the youngest son Harry who stayed on the farmstead working with Phillip and was the next generation to run the family farm. Small grains, a few dairy cows, pigs, sheep and chickens the family farm would continue. Harry met and married Adele later in his life at the age of 30 they had three children of there own and in 1973 the eldest daughter Coleen and her husband Tom came back to help on the farm and continue on the tradition in keeping the heritage alive that was started.

Moving their family of 4 from Jamestown ND they started out farming in small grains, corn and sunflowers also raising herford cattle. It wasn’t until 1999 when Coleen thought it would be a neat idea to reintroduce bison to the land and in 2014 Ruth, there eldest and her husband moved back home to help at the ranch. At any one time there are up to 200 American Bison on the land. With dedication and hard work this ranch of 4 generations is keeping this history alive of what once was. 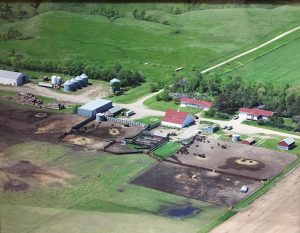 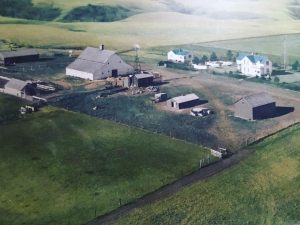 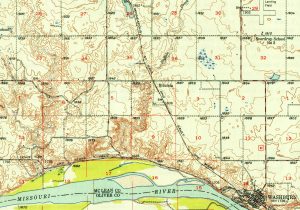