Gramps and MC had gone to Fargo for a week to see Shari, Dave and family. Shari is their youngest daughter and her and her husband Dave are in the hotel business there. With a fun get away planned for them they looked forward to spending time watching there grandchildren at high school football games and attending College swimming events.

With Gramps and MC away we were alone to attend to the ranch duties, which at the time I wasn’t use to doing being a newbie and all.  Darren told me that he was going to go and get some hay, load the grinder and then we would feed the cows. Alrighty not a problem. It was just Mags and me to sit and wait watching the tractors loader forks clamp down on the big round hay bales and lift with ease. I peered for Coco wondering where she was, I kept looking but didn’t see her so thought I had it made.  I jumped out of the truck that I had been siting in, with the heater on as it was still quite chilly, and Maggie sitting beside me.  Maggie weights close to 150 pounds which made it rather difficult to get her into the truck. Because of her size shes to big to pull herself onto the seat so if you’re willing and wanting to have a hairy companion sit with you while awaiting on the tractor then you have to hoist her up there.

As I walked to the gate, I could feel the wind as it hit my face leaving tears streaming down. I remember thinking Im likely to look 100 years old before the day was over with.  I pulled the chains off the heavy pipe gate and proceeded to push it open.  Thank goodness there was a wheel installed on the bottom of the gate giving it some sort of leverage as it bounced across the frozen ruts.

Stumbling over a couple of them I wheeled the gate open all awhile keeping a look out for coco the nuisance.  Darren drove through the gate and stops the tractor and said “hop in”.  Well whoohoo I get to ride in the tractor. And with Mags sitting in the warmth of the truck,  I hurried to shut the gate remembering what Gramps had taught me. Always shut a gate even when there is nothing around to get out, remember Coco? One just never knows what could happen so its a good habit to get into. I jumped up in the tractor and we bounced across the cold hard ground to the bull pen.  I said “I thought you were gonna feed the cows first”?  “Nope” Darren said “need ya to open the bull gate”.

As we drove closer I could see them peering over the hay feeder some shaking their heads at us with their fluffy tussles of hair and massive horns going side to side.  Darren stops the tractor, I step out to head towards the gate.  When one is in the  tractor the bulls do appear to be smaller in size then they are.  At that point I rightly didn’t want to even be there and asked if I could change my mind and get back in the tractor.  Darren just laughed, but I was serious.  They are huge beautiful animals.  I could see the foggy breath coming out of their noses as they sniffed the air trying to catch a whiff of who the poor soul was that had to open the gate.

Fumbling with the chains that latched around the post to the gate, I finally got them off and slowly pushed the gate open as Darren dove in.  As I turned around to pull the gate back closed who decides to make a presence but Coco.  She spied me and I could tell was fixin to come to visit.  “NO Coco you don’t want to go in here” I said as I hurried to close the heavy cold gate.  I figured she would just kinda of standoff a ways and watch me but oh no, when I say she wanted a visit she wanted a visit with a head scratch and possible treat.  She kept coming and coming closer and closer. Do I stand here and  hope for the best or put myself up on the fence.  Now mind you shes just a mear little bison of 1000 pounds with the most perfect horns you have ever seen.  Reckon they must be a foot in length and have the most perfect curve to them. Just enough to toss you a few feet in the air…in play of course.

As she got closer within a touch of my hand I just didnt have the gumption to stand there and crawled up a few of the rails on the fence. She sniffed my leg and I gave her a pat on the head and said “well how are you this day Coco” obviously she was good, looking strong and healthy.  She stood there and watched as Darren drove to the hay feeder with curiosity.  A thought crossed my mind as I crawled up to the top of the gate and swung my leg over to sit as she wasn’t about to leave.  How am I to get the gate open with her standing here making her next plan to see if she can outwit me and run into the bull pen.  It was almost like she makes it her mission to make the person who opens the gate her victim of the day.  Lets see if I can torture this human and make their life miserable as I try to trounce and prance around them.

So I sat and pondered while Darren sat the big bale into the heavy square metal feeder.  I watched as the bulls playfully took their heads and tossed the hay around.  When Darren backed up the tractor I could see him look over at me perched high up on the 7′ gate and I put my arms in the air and made a sigh.  This is called sign language gate girl style.  The closer he got to the gate I could see him smiling ear to ear and gave me his form of sign language.  With a few movements of his hand I knew or at least I hoped I knew what he was preparing to do to out maneuver the Coco beast that stood firmly in place awaiting her next chess move.  Crawling off of the other side of the gate, looking at Coco I said to myself “well here we go”.  I pulled the chain and Darren revved up the tractor as if he was sitting in his dream car at Daytona speed way waiting to hit the gas at the starting line.  Grabbing ahold of the gate I took off running as fast as I could with gate in hand and simultaneously Darren hit the throttle. A big puff of black smoke came out of the stack and off he took, big ole tires spinning he lifted the loader and opened the forks and then closed them lowering it making it look like a snapping motion.  Scared me to death as he whisked by me just inches away from my shoulder. Coco tried to give him a cow cutting move as she danced from side to side trying to sly her way in.  Running behind the tractor as it passed by I slammed the gate shut.  Gudnuf, no ma’am not today Coco. 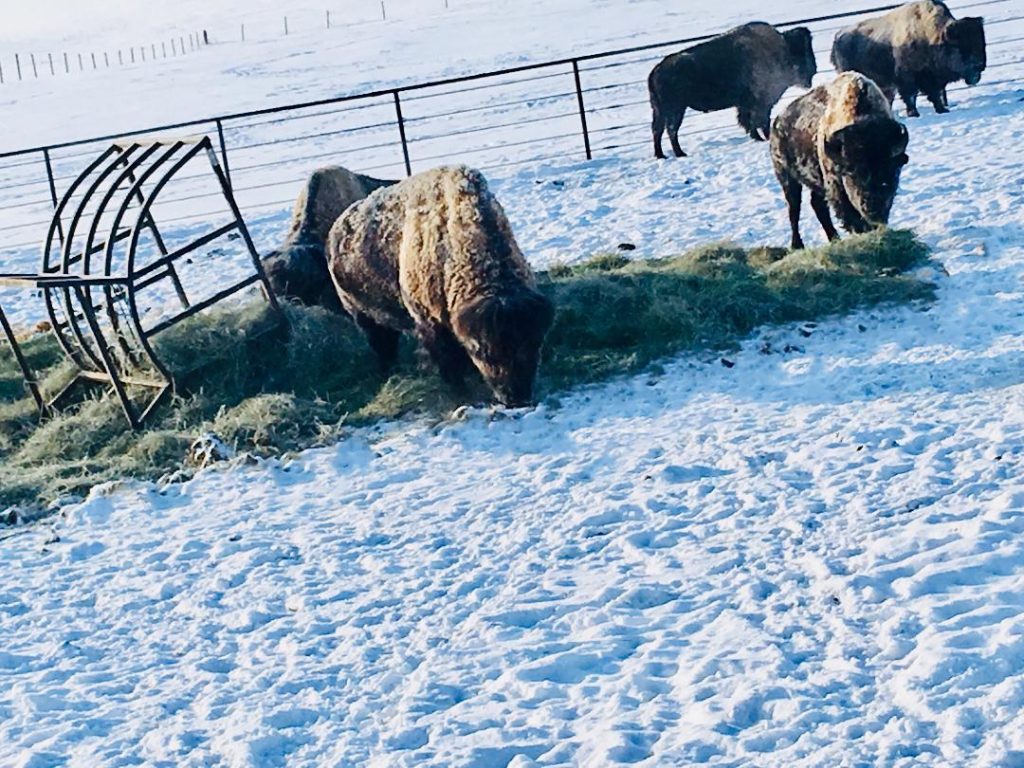 When the Bulls make a mess with the hay feeder