7:30 am and the alarm clock rang, its a far cry from when the rooster would crow at dawn when growing up.  It was a school day and with that comes a new day a the ranch.  I  crawled out of bed, sat up and grabbed for the wool socks that lay on the floor beside the bed.  One thing to be reckoned with is how sore ones feet get from all the walks about the ranch during the day, and this day was no exception. With a groan I was up.  Being the first of February makes those that live in North Dakota just want to toss the covers back over your head and stay in the warmth.

Lunch needed to be made for Shelby being our daughter, getting ready for school, while Rosie the first cat was weaving in and out between my legs.  Missy the wiener dog and Bleu the second cat sat quietly in their kennels waiting patiently for their breakfast.  Wandering over and looking at the thermometer that hung on the north wall of the old house told me the weather isn’t to my liking as it read 9 degrees.  One may think that isn’t so bad for February 1 in North Dakota but then again one hasn’t set foot outside to fell the bitterness of the wind.

Looking around the house, being the home of where my grandparents Granny and Grandpa Harry use to live, I had a feeling of what they went through each and every day.  It was as if most days Granny was there by my side, helping me move about the kitchen in her fashion as I recalled stories of boiling water on the cook stove to wash the dinner dishes and how she made the best fried chicken.  With feelings of what it must have been like, we were very fortunate to have the roof over our heads as our home was being built up on the hill just about a 1/4 mile up the road overlooking some of the most beautiful land on the ranch.

Pulling on the pair of boots that sat by the door, jacket and all winter attire I grabbed the bucket of feed that sat ready for Jags our eldest horse and stumbled over the longhorn rusty boot jack making way to the garage.  Opening the door one could hear the geese overhead making their way to the grain fields to feed.  There are hundreds of them and I had to wonder why they didn’t fly south.  On the way to the barn I could feel the cold bitterness on my cheeks and tears started to stream down my face as the wind whipped up the cold air.  Just about then Gramps with his red sweatshirt, hood up, was making his way down to the shop to start the tractors and Grandma not far behind him with her “mancatchers” on and Maggie their German Shepard right at heels.  The word mancatchers came from a family friend, which is quite fitting for those of us working out in the elements and being a woman with a sense of humor.  Old green pull up coveralls that doesn’t do ones figure justice, sporting an occasional hole and specks of bison manure is the dream attire worn by Grandma.  We like to tease her about it but she wears them well and even ventures out and may put on a stocking cap topped with an old worn out cowboy hat for nostalgia sake saying ” I remember wearing this hat this past summer when it was hotter then blazes” all though she may have used the term “dam hot” instead.

Grabbing ahold of the rusty horse shoe latch that opened the pipe gate to the main corral in front of the barn, I was greeted by bison calves at the front pen looking on at me with sniffs in the air.  The main herd down in the small south pasture were awaiting their feed that required the big loader tractors to toss the hay and the younger bison are kept close by the barn.  As I pulled the barn door open I could smell the years of dust, hay and animal as I talked to the horses and asked them if they’re ready for their breakfast and how their night was.  100 years or more this barn is as it was built by Great Grandpa Phillip all tongue and groove it has stood steadfast, strong and secure.

Walking about I could hear the rumble of the tractors starting and decided to check it out and to see how Gramps and Grandma were doing.  One could see Gramps in the tractor grinding up the hay in the south pasture for the cows while Grandma and Maggie stood guard by the fence so I decided to walk to the house and start some of my days work.  Not long had passed and I looked out the window and what did I see but a bison walking about in the yard. Here Coco the bottle fed calf that is now 2 years old and big I might add had escaped the fence through the gate and was playing about like an oversized dog in the snow and checking out everything from the direct tv dish, to the quaint little bird house that sat perched on a tree stump in Grannys yard.  I could see she was having a ball, almost like a kid in a playground looking around like “ha I dare you to catch me I’m free to roam”.  Now while she is tame, she also has horns and I’m thinking she remembers the playful tugs as a calf and may want to demonstrate to us that she now wins the tug a war.  Took some doings with mancatchers, think I’ll just call Gandma mancatchers MC for short and a treat or two she was lured back into the fence.  As the story goes on how Coco escaped there are two. One from Gramps and one from MC but basically as Gramps was driving the tractor out of the gate, Coco gave MC the slip and walked out on the other side of the tractor using it for her shield.  MC and Maggie didn’t have a chance against the wit of  Coco. 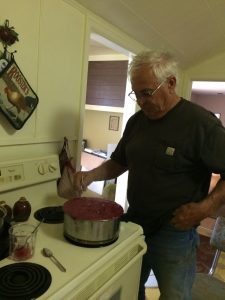 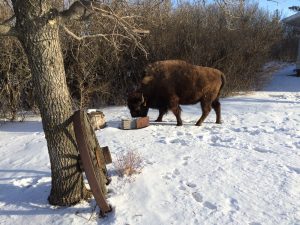 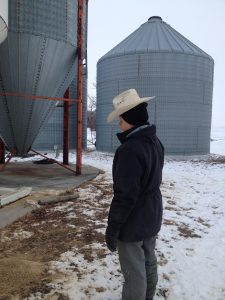