It was an absolutely gorgeous day February 26th.  The sun was shining and there was no wind atall which is a very odd occurrence in North Dakota.  It was a Sunday, and Darren was home from work at the coal plant. Even with all the work to do at the house we decided to take the afternoon off and go for a hike.  At 70 degrees we headed out the door Darren with his rifle in hand and us girls with binoculars.  The past few years there have been sightings of cats and by cats I don’t mean the cute little ole kitty cat, kind that sleep in the barn but mountain lions.

A few years past there was an occurrence here at the ranch with what Gramps believes to be a cat attack on the horses.  It was during a summer’s night, dark and stars as far as you could see.  The herd was in the big pasture grazing on the knee deep grass with moon light.  That year was a good year for rain and the pastures were lush.  Two of the horses were in the small south pasture right beside where the main herd was.  Not sure on all accounts of the events that happened that night but the next morning when Gramps and MC went out to do the chores here, there were two of the big bulls in with the horses.  After closer inspection they discovered that the bulls jumped the barb wire fence, only taking out the top wire which separated the two pastures and were standing with the horses.  One of the horses had a puncture wound right by his rib cage and was breathing heavily and the other horse had a gaping gash across the hind quarters that was deep, with flesh hanging and oozing blood.  It was then that it was decided that there had been a cat in the south pasture attacking the horses when the bulls went in to help.  Sound far-fetched? Maybe, but there was no reason for the bulls to jump the fence without cause.  The wounds on the one horse looked like a cat had tried to jump upon the back of him and slide down digging his claws in and tearing the flesh. The other horse was consistent with a horn puncture in his rib cage that could have happened when the bulls were charging at the cat.  It was a horrific sight with calls made immediately to the vet for help.  Sadly the one horse died that had gotten stabbed in the side. It was declared that his lung had been punctured and what transpired after that is something only one can believe through witness.  When the horse was laid to rest in the pasture, the bison went to his side and sniffed of him.  They went in groups of 3 or 4 each one taking turns as if to say goodbye.  Tears ran down Gramps cheeks at the sight of such awe and wonder on how animals can show compassion and respect for another.

The binoculars were needed because this past fall one of the bison bulls went missing.  Discovered it when the herd was brought in for the winter.  There was hope that he had taken on being stubborn and lazy not wanting to come in but as time passed he had yet to appear.  We walked and drove 4wheelers throughout the pasture in hopes of finding him alive and well.  Now it’s been several months and we are still wondering what happened so we decided again to search for him.  Even if it were remains that were found it would bring a sort of peace knowing what had happened verses him just disappearing out of thin air.

We finally set out with Maggie at our side.  The air was warm and the sun was bright with a warming feeling that gave you goose bumps.  Out passed the gate and down the hill, stopped, and looked through the binoculars looking for anything that may resemble a bison.  Next thing us girls realize is that Darren had disappeared.  “Where did your dad go Shelby?” “I don’t know” was her reply.  So we just went on our way with Maggie trudging along with us.  The grass was crunchy, brown and long as we walked venturing down the hill.  Slipping and sliding grabbing ahold of branches or tall grass to make way as there was ice hiding underneath some of the grass that made it difficult to climb.

Making to the creek bottom Maggie jumped in and licked up the ice ridden water. “Brrr Mags how can you stand it” she wagged her tail as if to say “its delicious”.  The creek still had ice here and there so one had to be careful when stepping on it not to fall through.  Out of no where appears Darren. Shelby hollers. “DAD where have you been?”  I’m thinking sure…right away the one with the gun leaves while us girls who are defenseless unless you count Maggie..He figured it was best we split up to make better ground?  Guess that sounds good in theory but it didn’t hold much water with us girls.  He shouts orders to us.  “You guys stay on the bottom along the creek and I’ll go up top.”  Oh yeah give us the hard part, having to cross the creek and trudge through the long tall mud ridden grass with the unknown in it.. Well ok then. So off we go in separate directions.  Maggie looked at Darren and then turned back towards us and opted to stay with the girls.

It was downright hot in the pasture.  Not that I was complaining but it was.  The end of  February and we were sweating and thirsty, hard to believe but it was warm.  Maybe that’s why Darren wanted to be up top?  Shelby was walking along with her phone doing the modern cowgirl thing when all of a sudden I heard this great commotion and a ahhhhowwwweeee.  I turned just in time to see Shelby sitting have cockeyed in the mud in a deep grass covered trail the bison had made in travels.  Had to hold onto the laughter as it was kinda funny looking.  Why is it always funny when it’s not you that has been in the predicament?  “Are you ok” I asked. “Nope” she said. “Well I’m fixing on walking up the hill as there’s no place to cross the creek your welcome to join me or camp her for the night”.  Out reached hand I helped her to her feet and we set out to find a trail up the hill Maggie at tail end.

We weaved around, threw and over the top of trees and branches that had fallen over the many years.  Could see the trail where the bison had used to make way up the hill which was wide and well used.  As we started out we found out just how steep it was our feet spinning in the mud.  We slipped and slid trying to catch a grip for good foot hold and grasping at small branches along the way to pull up.  finally reaching the top, puffing and out of breath I said to Shelby “where is Maggie”.  We looked back and here she was about 3/4 way up the trail siting and panting and had a look on her face like “really you expect me to travel up this mess of a hill?”  I walked over and tried like the dickens to encourage her to move up.  Maybe if I would a had a treat to entice her it may have made a difference or a small chunk of steak but as it was I didn’t.

“Come on Mags you can do it, your almost there”.  She sat there looking around as if to say “I can’t care an if you think I’m budging on more inch your mistaken and for the record there is a much easier way to the top of the hill.”  I reckon she was just too tired of the slipping and sliding.  So I told Shelby to go out and sit with her dad who by the way was sitting on a hill all peaceful like looking through the gun scope at what I do not know.  My thoughts were seriously you are sitting enjoying the day while we are covered in mud up the back of our britches with a big dog whom out weights us girls.

As I pondered on how to get Mags up the hill it should be easy one would think. I mean after all it was easier to go up then down at this point.  I slid down the hill to where Mags was sitting as I grabbed ahold of her collar to try to pull her she got up and tried to walk with me.  She fell down and started to roll back down the hill taking me with her.  In the mud she went over once and drug me to my knees and we both skidded a ways to where a tree was and stopped there.  She laid with me right side up and covered in mud I looked at Mags and said ” welp we made it let’s go home”. Up she got and with ease ran down the hill.  Hmmm think this dog is smarter then we give credit.

After a fashion weaving around, up and down around and through the trail’s, longer but easier we made it back.  Left Darren and Shelby sitting on the hill figured they could find their way home which they did with what is called a handy dandy cell phone and a call to mom saying will you come get us with the red truck. 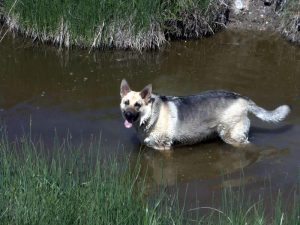 Maggie in the cold spring water