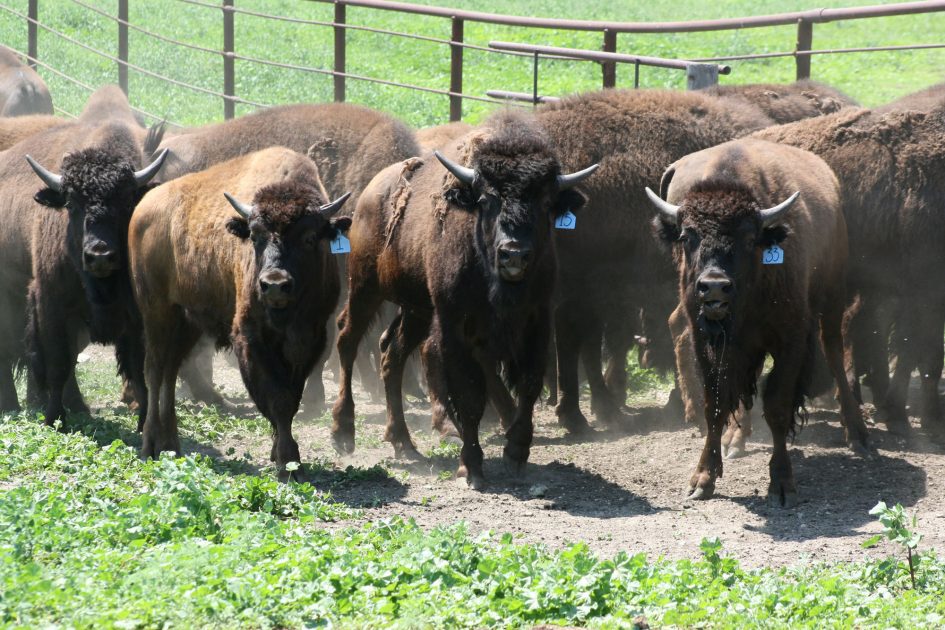 BISON RAISED RIGHT TO BE THE BEST

Bison meat is extremely healthy and naturally flavorful.  In fact if you didn’t know, you would think you were eating the most flavorful beef steak or burger you have ever had.  It’s hard to believe that buffalo has less fat than turkey or even chicken with the skin removed.  Our bison are handled very little, this enhances the quality of the buffalo meat and also ensures safety to the animal. Bison are easily stressed so our beliefs are less handling creates happier healthy animals.

The Bison spend their lives here grazing on natural grasses on the prairie in the spring through fall months here at the ranch and are wintered in a south pasture. Bison are resistant to disease and are very tolerant of extreme cold and prefer the out of doors year around.  We spend the summer months putting up quality hay for feed for them and supplement them with mineral tubs and or cow cake. The bred cows need the extra supplement for nutrition in raising strong healthy calves.

Growth hormones and steroids are never used here at the ranch and only on occasion is an antibiotic administered due to injury which can naturally occur. We believe in quality care and treatment of our herd, our bison are like family and we treat them as such.

It’s common, in fact, that we sometimes use the two interchangeabley.  But if you really want to know the difference between a buffalo and a bison, the American Bison is native to North and South America and Europe, while the other two buffalo species reside in Africa and Asia

The value of bison meat is not what you pay, but what you get in return.  Nutritionally, bison purchasers  get more protein and nutrients with fewer calories, fat and cholesterol.  It also is packed with vitamins and minerals.  Bison is a dense meat that tends to satisfy despite the lower calorie count.

Research has shown that the meat from bison is highly nutrient dense food because of the proportion of protein, fat, minerals and fatty acids to its caloric value.  Comparisons to other meat has shown that bison has a greater concentration of iron and essential fatty acids.

An estimated 60 million bison once roamed throughout most of what is now the United States, Canada, and Mexico.  Bison were the integral animals for the Plains Indians who used all the parts of the bison, wasting little.  With the arrival of pioneer settlements in the western north American, by the mid 1800’s the American bison herds were destroyed, numbering in only the thousands.  Due to the foresight of early Western pioneers and Native Americans the bison were saved from Extinction, and the herd began to grow in numbers.  Today the number of bison in North American is estimated to be in the excess of 500,000.  The animals are maintained  both on private ranches and in public herds, with more then 90 percent of them owned and managed by the private sector.

On May, 9th 2016, President Obama signed the National Bison Legacy Act into law, officially making the American bison the national mammal of the United States.  The majestic animal joins the ranks of the Bald Eagle as the official symbol of our country – and much like the eagle, it’s one of the greatest conservation success stories of all time.

Bison can jump over a 6 ft fence if cornered

Range cake made with molasses and grains is like candy to the bison.  They will come for their treat when called