Was getting on towards the end of summer and time had come to rejoice in my cousins wedding on August 20th.  Was a great summer with the expectation of a few mishaps one being of Bleu the cat and the other Missy the dog.  See Bleu went to a peeing all over our new home to mark his territory.  Horrid’s of cleaner, sweet smelling scents to unmark the smell didn’t seem to hold a candle to his desire to mark every spot to his hearts desire. Finally took him to the vet and success.  Neutered and now no troubles at all.

Then there was Missy miss wiener dog got herself into a heap of trouble after getting into something here at the ranch.  Called Dr Jo and he was out of town so in a panic we called the vet in Bismarck.  They took xrays and gave me the “look” of are you not paying attention to this dog look.  Apparently she had gotten in to some bones while she had been outside. Missy is a mini dachshund and they are known for there tracking skills of rats. Her nose was constantly on the ground searching for anything that may move and would spring to the attack mood when seeing any sort of critter move including grass. So the vet sent us home with some meds and in no time at all Missy was back to her old self.

Then there was Jag, August 20th was a grand day.  We had traveled to Fargo ND to attend the wedding.  Day was incredible and so was the wedding.  We had left Mr Beckman in charge of the ranch to come around and check on things, do chores and tend to anything else that may accrue.

Leaving the ranch is hard as there are so many animals that need ones attention.  Everything seemed to be at hand when we arrived back home.  MC and Gramps stayed in Fargo to help out with family so we hit for the ranch before returning to the house.  Checked in on MC and Gramps house, watered a few flowers or as MC would say the posies, the garden was fine and gave it a drink of water.  Darren wandered about the ranch to make sure everything was ok.  Tired from a long journey we all jumped back in the car to go back home and when we drove by the little barbedwire corral saw Jags lying flat out in the hot sun and his companion Mac standing nearby switching flies.  It appeared Jags couldn’t get up. “OH NO” I said. Darren laid into the brakes, hit the reverse and drove to the corral.  See Jags has a tendency to get the colic. Hit him hard a past winter ago when it was pry about 15 below and a wind-chill.  That day was a Saturday, later in the day, when we noticed he was down. At that point it requires immediate attention and we got to working by pulling him up, gearing him up with a nice warm heavy blanket and start by making him walk to keep things moving.  A call to the vet on a Saturday can be tricky but Dr Jo is on call and made a special trip back to the clinic to meet us and send us home with meds. Was a night to remember but Jags pulled through and now these days we are quick to take note when things don’t look right with him.

Darren ran with a lead rope in hand as it was obvious that Jag couldn’t get up.  He latched on to the halter and pulled with might and up came Jag.  His side was all sweated up and he appeared weak in the legs. I hollered “Get him moving he needs water too” as I hurried off to Granny’s where we kept the pain meds in hope of getting our beloved horse well on his feet again.  By the time I had returned Jag was by the water tank, and looking a bit better but we opted to take him to the barn to try to fix him up with some meds. Now for being a sick horse he did show some strength when trying to administer the syringe of meds to his mouth.  Was thinking at one point in his life, he musta got a good lesson with someone else’s bridle to mouth.  Can’t know that but one has to wonder when a horse is touchy to his mouth.  See jags is a mustang from California and rescued from a SD ranch from starvation.  He’s a tough guy and who knows what stories he could tell if he had words to share.  At 28 years of age he’s the best horse on the ranch and I aim to keep him well.

After a few pull backs on that ol’e metal fence Darren had him tied to, he was able to get a bit of medicine in him.  Jags wasn’t liken it by any means but it did him some good as after a short time he was walking around with Mac and trying to munch down some grass.  As that occurred Darren had discovered that something happened in the barbedwire corral we had over looked.  It appeared Jag had gotten his halter hooked on a wire, pulled back and ripped out the fence post along with a few stands of wire. We don’t rightly know for sure but that’s how it appeared. When we had first found Jags we wondered why his leg was all cut up and a small gash on his forehead as well.  Hair was missing on his sides from all the rubbing he did as he was laying down trying to get up.  Whatever happened the decision was made, NO more halters on when the horses are unattended.  Mr Beckman was on his way out and had found some sav for the wounds on Jags. Things can happen so fast on a ranch, thankful we all came together to help right the situation. Jags is good, Fence needs mending but life is good. 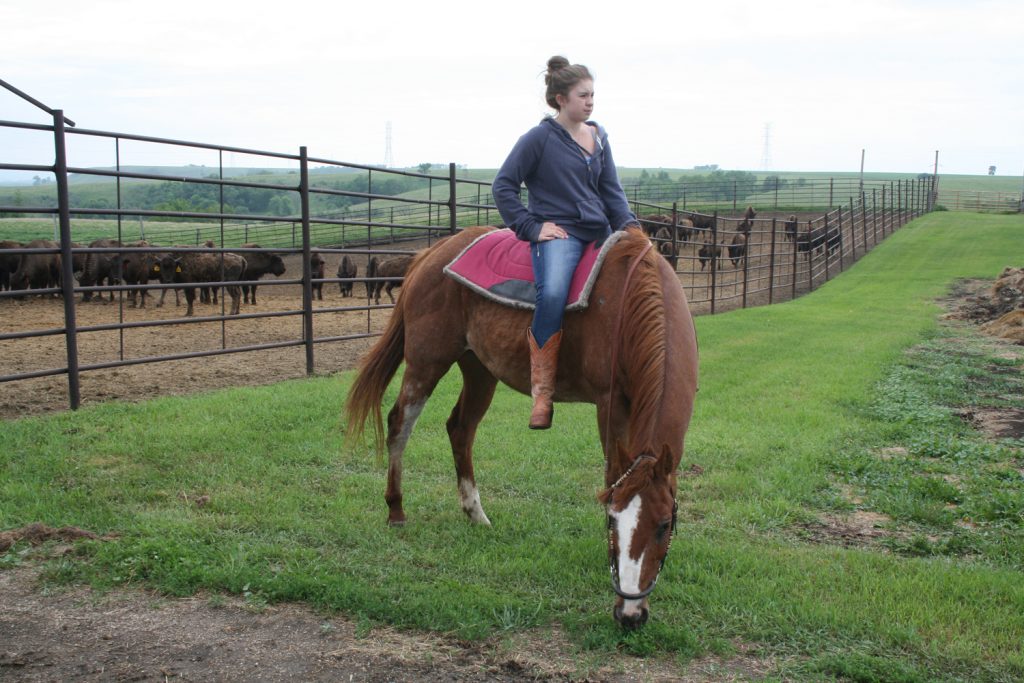