It was Sunday morning and at 7:36 I opened my eyes and with a blur got up.  Figured if I wanted to get a dose of Joyce Meyer in before Church I best get at it.  Grabbed my phone and put on the ap that I had just downloaded to watch an episode, grabbed my bible and laid in bed.  Now how convenient is that, being able to study with Joyce and lay in the comforts of your own home.

After a fashion looked at the time and decided to get some breakfast, but as I went by the closet I got distracted and looked for some church attire.  I have nothing to wear was the thought that crossed my mind as I crammed my butt into a pair of white britches I hadn’t wore since Grants (my nephew) confirmation going on pry 5 years now.  It appeared that the britches either had shrunk or I had gained weight which isn’t to a gals liking on a Sunday morning, but I kept them on and put on a pretty long beige shirt sporting long floral lace along the edge and up the back.  Walked and looked in the mirror and thought, “hmmm is  this too sexy for church” I”ll have to ask Shelby she will tell me.  Proceeding to the kitchen I pulled out the toaster and some of this awful bread I had purchased on line that was suppose to be so good.  Got me this wild hair to do this about a month ago when I saw an advertisement on Facebook for some Paleo bread and bars.  Word of advice, don’t do it.  Bread falls apart upon touch and is drier then 100 year old shoe leather even with scads of butter, jelly and almond butter on it and the bars don’t even get me started on those.

As I sat down to turn on the computer I spied out the window a cute little deer wandering around along the edge by the fresh cut durum field.  She stopped and looked around then proceeded on her way.  I looked down at the computer screen to wait for it to load, toaster popped up (oh great breakfast is ready can hardly wait) and all of a sudden something caught my attention by eye.  Looked to the field and thought I saw the deer again but there was something oddly strange about it’s shape.  I got up and got the binoculars to take a closer look at what it may be. It wove in and out of the tall grass and all of a sudden it jumped in midair, kinda like Bleu that cat does when tossing his toy bear around, and then pounced down a couple of times.  It was then I saw a long cat like tail flipping around.  I was in disbelief for a split second thinking this can’t be as I ran for my phone to the bedroom where I had it laying.  A call to MC, and text to Darren  as Darren was at work, hands shaking so bad I darn near dropped the phone while looking thru the binoculars.  MC was the first to respond and as I  told her what I had seen she said WHAT?  I said, “yes there’s a mountain lion in the field headed towards your tree line.”  Next I heard MC holler “TOM GET THE GUN” there’s a cat in the field.  Gramps in his stockins, no glasses hair ruffled, ran for the gun and to the pickup while the cat kept making it’s way towards the farm.  Walking in the fashion of a cat on the prowl, with its unique swagger and in a straight line never once veering off the path.  Around the corner came gramps, speeding down the road in the truck and drove right by the cat. “GRAMPS stop you drove by him” I hollered from my bedroom window as I stood peering through the binoculars.  Strange thing was that cat never jumped, never ran away at the sound of the pickup driving by.  I ran, white britches and all out the door still with my house shoes on through the dirt and gravel.  Caught Gramps just as he was at the corner of our driveway and said. “Gramps he’s pry in the tree row by now, you drove by him” Gramps turned around and off he went barreling down the gravel road dust flying in hot pursuit of the large feline. It was about then I had lost sight of the cat when Darren wrote back and said “the gun is in the closet.”  I went to the closet, grabbed a hold of it and thought I’ll tip over if I actually figure out how to shoot the darn thing.  Be like watching one of them old westerns were the bad guys get blowed backwards and off their feet.

As Gramps got to the edge of the trees here came MC and was standing on the roads edge peering into the tree line. She jumped in the truck with Gramps and off they went driving down through the ditch and slowly inching by the tree row every so slowly looking for any movement there might be.  The tree line is pretty old and has over grown with tons of grass, bushes and new tree growth among the old. Hard telling where the cat could be and what else may be lying in among the grass and dead fallen trees. A phone call from MC saying later that they couldnt find a thing making several passes by the trees and that they were going to go back to the house and check things there.  Feeling down right uncomfortable about the situation at hand, changed into work britches, couldn’t see getting the white ones dirty, and off I went, in the car, down to see if I could see anything.  Through the same ditch I went and past the tree line with my trusty binoculars in hand looking for anything that may move in the tall brush.  All of a sudden there was a swishing sound and I looked towards the trees behind MC and Gramps house.  My heart skipped a beat as I saw Ernie the cat run out.  “ERNIE what are you doing out here, you scared the living daylights out of me” goofy cat.  Never did find the mountain lion, just disappeared as fast as it showed up.  Thinking I need to learn how to shoot that little ole gun in the closet.  No church, no mountain lion, said a prayer that the good Lord watchth over all. 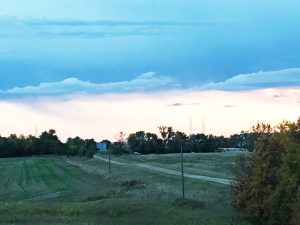 The trail of the Mountain Lion