Spring time was at the ranch and thinking it was due to let the herd go out to the big pasture for the summer.  The cows were restless as they paced back and fourth by the newly installed game fence that had been put up.  In the past there was the same 5 wire fence separating the two pastures. There had been to many things that had transpired with that fence such as the cat attack that lead to the game fence. Since then its been better with the exception of a couple of times when a new calf snuck out underneath the gate.

June 1 came and it was decided that it was time to open the gates. We all were on deck as the cows kept a watchful eye on us all. Some still pacing back and fourth along the fence looking at the green tall grass of freedom on the other side.  The coulee hills were plentiful with the water running in the creek and the sound of the winds breeze brushed across the prairie  MC was concerned about Coco as she had never been in the pasture and rightly so. What would she do? Being our calf she appeared almost human at times and one does have to wonder.  Gramps and Darren walked down to the gate as the rest of us stood a top the hill waiting to see the rushing of the herd to their summer  grazing ground.  As Darren opened the gate it was quiet you could hear the heavy metal gate swing with a squeak.  Then the call “Come Boss” from Gramps the cows looked and in a fashion they all ran.  The ground shook like thunder underfoot and you could hear the tall grass rustling as their hooves touched down.  A sight to beholden too and only an image seeing with own eyes.

Grunts from the cows to the calves looking for their own, and then there was Coco who almost looked in amazement at Gods Glory before her eyes with the sun beaming down on the hills.  Most stood and ate to their fill in the tall lush grass as if it was candy.  The sweet taste seemed to make them happy to say the least.  As I stood there and watched I wondered what they must think after a long hard winter with hay that was put up the past season.  Before too long, they were off down the hills around rocks, and brush.  Crossing the coulee seemed to take only seconds for the herd while there stood Coco as if to says “wait for me” as she stood there watching her furry companions she had come to know this past winter, run free.  She looked back at us as if to say “are you coming” looked forward and ran down the hill after them.  I said in my mind “you go girl” you will be ok.  Be a bison now. 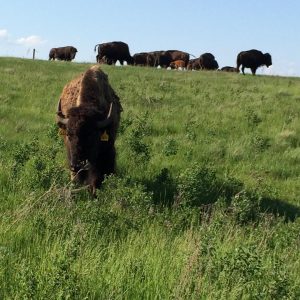