The day came when we finally moved into the house alot of the details weren’t finished but we didn’t care and we all were excited to have our home ready to at least move in.  I remember it well as it being all of May 13th Friday the 13th.  It may scare some with the bad omens and all, but all went ok.  Gramps helped us as we hauled a few pieces of furniture up and unloaded.  With bed frames together we got to sleep in the new house which seemed to be someone else’s after the many hours of work we put into it.  It may take some doings to make it feel like our home.

Wasn’t too much later in days, and the words “We have to sort the yearlings” came to note.  It is a big day, one may not think so but those calves have grown since the weening of them.  Today we separate the heifers from the bulls and put them in different corrals to keep them apart.  Don’t need us with any calves uncalled for.  I remember one of the early years when Gramps and MC first started and they may have kept them all together to long.  Shelby grew fond of a heifer that would come and eat out of hand.  Now this was years before we came to live at the ranch but for some reason that heifer calf walked up to her and from then on the name was Jenny who still walks the ranch.  Well the reason why Jenny came to stay is because she had a calf as a yearling along with another young heifer.  This day though we were to get them all separated and tagged as to have no new occurrences to the likes of Jenny.

It was a pretty nice morning, Shelby and I drug our feet a bit as we were told 10 am sharp.  Phone rang before hand to the words “where are you” before we were to be there.  Guess us girls go to the time clock and there also is this thing called a ranch clock that everyone goes to here.  We arrived as all hands were on deck waiting on the girls to show.  Mr Beckman and Ms Jane, long time family friends and the rest were ready and waiting.  The jobs already had been sorted out.  Gramps was in the pens with the yearlings getting them to the chute as MC ran the alley way gates along side of Darren and Mr Beckman.  Ms Jane and Shelby were to get the worming medicine ready and keep track of the tags counting how many heifers and bulls there were.  And Me..what was I to do? “Well you go right in there and run them gates” says MC.  What gates I was thinking…oh the gates in the separating alley way. Oh Ok well I can close a gate I guess.  First batch of calves was pushed up to the alley way and onwards to the chute.  They are strong and you can hear them hitting the metal gates as the rolling gates are closed to secure them in.  With some persuasion they reluctantly act and don’t rightly want to go in.  All of a sudden crash, bang the first one takes off and hits the crash gate in the front that keeps them in and slam the head lock goes down and the leaver is pulled to suck them tight simultaneously so’s they cant move.  Seems a bit concerning to the animal but they are tough and we always take as much care and caution to all involved when working with them.  Mr Beckman hands me a flag on a stick and said “use this to distract them when I let them out.”  Flag on a stick and little ole me to stand fearlessly in the alley way and direct bison traffic? Alrighty then.  The first couple no problem they were heifers and easy to direct down to the end and close the gate.  Then the first bull came up and he was big.  Mr Beckman yelled “bull” and swung the gate open.  There I stood feeling like them there matadors in a bullfight wishing I had a red cape to fly away.  The power in his front legs as he took off, incredible, was almost like slow motion as I stood there wondering what I was to do if he decided to come my way, which he did.  I gave the flag a little girly wave and then figured out just how fast one can climb a fence. Well, girly wave didn’t do it so I’m gonna have to use more force next time as the bull came woshing past me in lightning speed and hit the gate at the end of the alley.  As the bull turned around and came back running into the pen Mr Beckman shut the gate and said to me “Stand Closer”.  What in tarnation would I do that for I was thinking.  Stand closer to the pounding death of my life that would surely transpire if I did get closer but I did as I was told and it worked.  Mr Beckman would swing the gate open and I would take my flag and direct their heads in the direction I wanted them to go.  They would follow the flag and see the open gate and in they would run with the exception of one.  He was hell bent on taking someone out that day.

Standing there feeling more confident then I should have been, I heard “bull” and Mr Beckman swung the gate open in cowboy fashion like they do at the rodeos.  Out Mr Bull came in lighting speed almost like he was shot out of a shotgun launching his body toward me. I got my trusty flag a waving in the air as fast as I could.  Flag….what flag as he laughed at it as he came flying by with his head down and came towards me.  It was then I learned the meaning of why clowns at the rodeo have a barrel to jump into.  RUNNNNN to the fence, and in one swift motion I was up and over on the other side and hung on for dear life.  Funny thing was I had swung across into the holding pen were the rest of the calves were waiting to be run through.  They all stood there looking at me, switching their tails with big brown eyes. Think I’ll take my chance with y’all I thought.  Next calf comes in and I mean he’a came in a running through the chute just as hard as he could, hit the crash gate so hard it popped open.  Now some of ya’ll may wonder what a crash gate looks like, sturdy bottom in octagon shape with bars that run up and a cross bar at the top of heavy metal.  When that came open he was out which isn’t good as his buddies are all locked up on the other side in pens.  He ran and ran hitting whatever metal object he could find that stood in his way.  I do have to say it was scary as I didn’t want him to hurt himself.  Darren ran for a gate thinking it may lure him back into the alley way and about then Mr Beckman let another bull out of the pen in hopes they would join up and run back to the holding pen.  And it worked, they saw each other, turned and ran straight back into the holding area. Guessin the Lord had a hand in that one.  The rest of the sort went well without a hitch.  Praises to God this day is done and all is well. 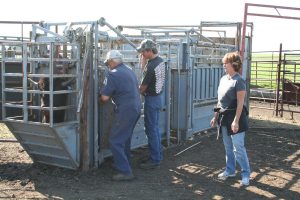 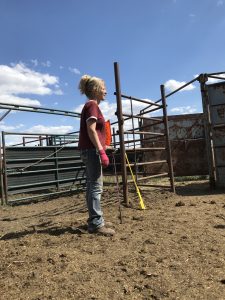 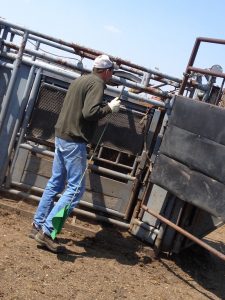