There is alot of mowing to do at the ranch, with all the acreage it tends to need attention weekly.  MC had her zeropoint mower which is a God send for her yard as she has created a beautiful oasis of flowers, trees and rocks in perfect fashion.  Something my tractor mower doesn’t do well with.  Along with the two yards to mow there is the ditch along the grain fields, down by the mail box and around by the shops and grain bins.  Can take you a few good days to complete and even then some.  The day had come for mowing down by the shop.  MC’s plan was to have me mow with my mower around the bins on account it was smaller and could maneuver closer and she would take the B with the belly mower on it. That Old B tractor has seen some days and if it could tell stories I could write a book. I remember one time way back when my sister and I were growing up, Grandpa Harry took us girls out fencing with him. Us girls couldn’t a been more then 8-10 years of age. We were driving along the fence line when Grandpa decided to give Shari (my sister) a try at her tractor driving skills. The B was equipped with a small wood wagon on the back loaded with a roll of barbwire, fencing staples, hammers and other odds and ends that one may need.  With Shari at the wheel on one side of the fence, and Grandpa and I on the other side we walked along checking wire and staples. Over the horizon I could see a rock pile right along the fence line as well as a wheat field which butt up right along side the rock pile. Back in the old days of farming, farmers would either pile up rock that was picked from the fields along section lines or in the middle of the filed. So along we moved and everything was going good until we came upon that ole rock pile. With the words, Oops, Oops, Oops from Grandpa I looked to catch him in mid flight clearing a 4 strand barbwire fence to help Shari out who had decided to see what type of climbing abilities that old B tractor had. I’ll never forget that sight as the B did its best to maneuver up the rock pile before Grandpa got ahold of the wheel. No harm was done but its one of those good old memories that sticks in my head.

Mac and Jags were already out and about enjoying the day with plentiful grass.  See we let them two wander about the yard during the summer months. They seem to love to be out and able to walk about which also helps with the mowing.  MC handed me some dark black sunglasses to help keep the dust and dirt from flying up, got our game plan and we hit for the mowers.  Beforehand tho MC said to me “there’s a load of feed coming today and the men are gone so it’s us girls in charge”.  Gramps was in Bismarck and Darren was working so that meant we were on deck.  Was a nice hot sunny day and these days I’m either in short britches or long pants depending on how dirty I want to get.  Can’t say enough about the perfect farmer tan that sported this body of mine.  Perfectly short pants tan on the front of my legs, tank top marks on my shoulders and the most perfect white belly and back of legs anyone could want.  Not anytime soon will I make the beach.  Jumped on my machine and off I went to start the day of mowing.

Mac and Jags switching their tails in time and munching away at the grass giving no mind as the mower passed by with only an occasional look.  MC on the B was moving right along, seemed fitting to see her riding it with only the old straw cowboy hat that was missing she sports on occasion. About that time the feed man shows up.  In the yard rolls a big semi-tractor and trailer with about 30 ton of feed for the bison yearlings.  Mac and Jags seemed unbothered by the fact that there was something strange in the yard but with curiosity Mac decides to come and check things out.  I continued with mowing as MC stopped to chat with the driver. All of a sudden I got my machine hung up on a slope by the grain bins and there I sat stuck.  MC was still vistin with the feed man and the only help of assistance was Mac who came over only to sniff at me and maybe check out the situation. If only you could help Mac was my thinking as I crawled off the mower and had to gather up the human reinforcement’s that were still chatting away by the bin.  With one quick shove I was off and mowing again.  A short time had passed and while the feed was still being unloaded I stopped to check to see where else MC wanted me to mow.  Again Mac came up to see us and it was then I looked down at his foot as I noticed he was limping a little. Here one of his shoes on his front foot was about off and hanging to the side.  I said, “Mac what did you do?” I bent down, tapped on his leg, he lifted it for me and I lightly pulled and it popped right off.  He gave me a nuzzle as if to say thank you and still limping walked away.

Now Mac can be a nuisance always wanting to see what you are doing and check things out.  Day before when Darren was in the big shop trying to work, Mac just had to come in and investigate.  Darren would clap his hands together to leave and he would run out, head held high and tail in the air creating a dust storm as he roared out leaving a trail of dirt flying behind him.  This went on several times and it appeared to become a game.  Darren figured he musta hooked the side of his shoe on the heavy metal door stop in the center of the cement that holds the big doors closed when shut. We doctored on that foot for about a month or so with a new shoe put on but he had come up lame pretty good.  Kept the foot clean , brown sugar and iodine paste was made to smear on the bottom of his hoof to the injury.  Mac is now back to his old self, full of games and shenanigans. 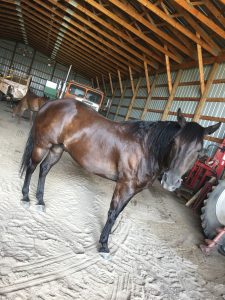 Mac and Jags in the shop